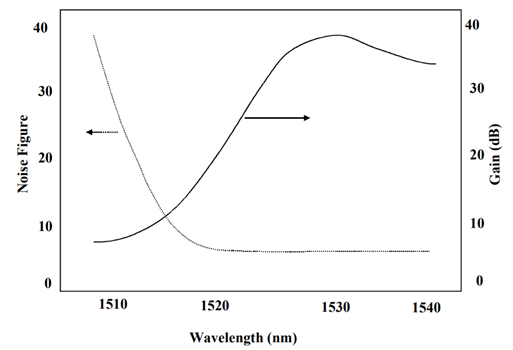 What is Laser Amplifier Noise?

As we discussed in our previous post on the subject, there are surprisingly few differences between amplifiers and lasers.  The only real difference is that unlike a laser, an amplifier does not have a resonator.  This means that in a laser amplifier there is no means of “catching” a spontaneously emitted photon and redirecting it back into the gain medium to start the stimulated emission process.  Instead, an amplifier relies on the input laser beam to trigger stimulated emission, making all of the emitted photons identical to those of the incoming laser beam.  This simplified explanation ignores the fact that there are still spontaneous emissions going on in the amplifier, which degrades the signal to noise ratio (SNR).

Therefore, the quality of a laser amplifier is determined by the difference between the SNR of the incoming signal and the outgoing signal measured in decibels.  In the industry this value is known as the noise figure and is the go-to characteristic for determining the quality of a laser amplifier.  For example, the TOA turnkey benchtop high-power fiber optic amplifier from Bktel, which can produce up to 30dBm of output power between 1530nm to 1565nm, has a noise figure of 5dB. 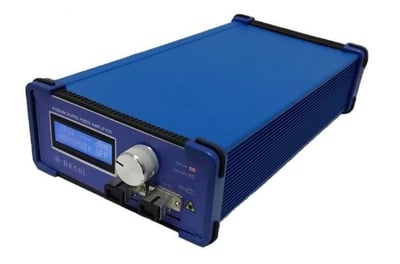 While a detailed explanation of the physics behind how noise figure is derived is beyond the scope of this blog post it is essential to note that it is directly proportional to the amount of spontaneous emission, which itself is inversely proportional to the amplifier’s gain.  Therefore, as the gain of the amplifier increases, the noise figure should decrease.  As a result, whenever you are working with a variable gain laser amplifier you should always be aware that at lower gain settings the noise figure can be drastically increased.  The figure below does a great job of illustrating this fact by looking at the gain and the noise factor for a typical erbium-doped fiber amplifier (EDFA) as a function of wavelength.

For additional information on the basic principles that affect laser/amplifier gain, we recommend reviewing our previous post on the subject titled “Laser Diode Fundamentals: Diode Gain Threshold.” Also, if you would like to get more detailed information on the laser amplifiers offered here at RPMC Lasers, click here or, you can talk to one of our laser experts today by calling 1-636-272-7227.