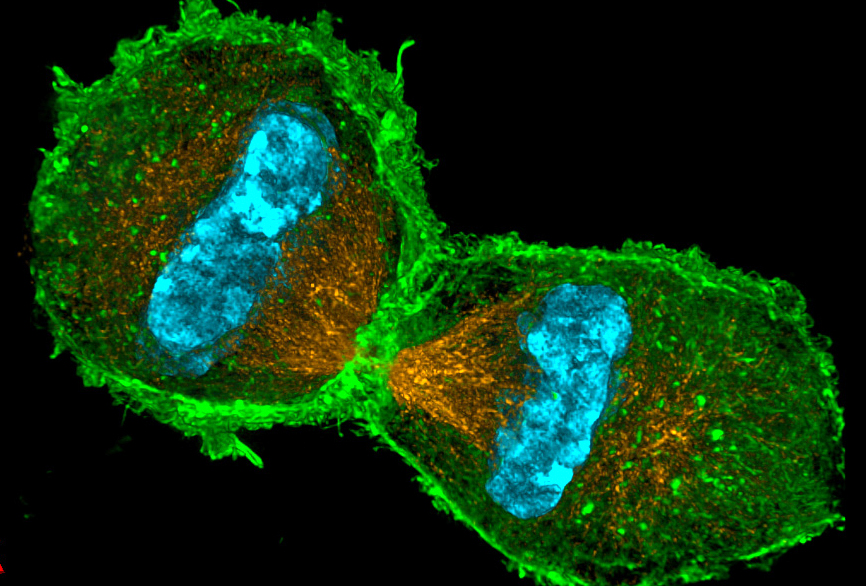 Fluorescence microscopy is deployed widely in biological sciences for identifying the spatial distribution of molecules of interest in complex heterogeneous samples, including living cells.  Over the past 100 years, this method has been heavily dependent on the use of fluorescent tags which have uniquely engineered excitation and absorption spectra, and are functionalized to bond with particular molecules of interest.  Not only do these tags increase the technique’s specificity, but they also reduce photochemical degradation of the sample by moving from ultra-violet to visible excitation wavelengths.  For many years the advantages of fluorescence tags outweighed the disadvantages of the sample preparation requirements, but with the emergence of two-photon fluorescence microscopy, it is now possible to achieve many of these same advantages without any sample pretreatment.   As a result, two-photon microscopy, also referred to as multiphoton microscopy, has once again revolutionized the field of biological imaging allowing for the creation of high-resolution images of living cells.

Multiphoton absorption as an excitation source for fluorescence was first theorized as far back as the early 1930s, 30 years before the invention of the laser enabled the construction of the two-photon microscope at Cornell University.   But it is important to note that it wasn’t just any laser that would facilitate two-photon absorption; this process is only achieved when utilizing an ultrafast mode-locked laser.  To understand why this application requires ultra-fast laser pulses, you must first recall that the sum frequency generation, also referred to as second-harmonic generation, is a nonlinear process.  Therefore, this process is dependent on the intensity of the lasers electric field; hence, a tighter focus and a shorter pulse width will result in more efficient two-photon absorption.   For a diffraction-limited microscope, the spot size at the sample is determined solely by the numerical aperture of the objective lens and the laser wavelength, that leaves the pulse duration as the only significant variable in the system.  For this reason, mode-locked lasers which produce ultra-short pulses (on the order of 100 fs) at high repetition rates have become the standard excitation source for two-photon microscopy.

While the first two-photon system was demonstrated using a mode-locked dye laser, the apparent drawbacks associated with dye laser technology prevented any sort of commercialization at the time.   It wasn’t until the advent of the Ti:Sapphire laser that such systems started to evolve from a physics demonstration, into a true analytical instrument.  The Ti:Sapphire was a vast improvement over other early mode-locked laser sources, but it was far from an ideal solution.  One of the biggest reasons for this fact is that the majority of fluorescent proteins of interest to biologists have a two-photon absorption band primarily in the 900 nm to 1100 nm range, while the peak lasing efficiency of Ti:Sapphire is around 780 nm.   Luckily now there is a wide variety of lower-cost, fit for purpose mode-locked lasers sources available on the market.   Spark Lasers in Bordeaux, France, developed one such laser source specifically tailored to the needs of two-photon microscopy applications.   The Alcor laser is a mode-locked fiber laser, with ultra-fast (<120 fs) pulses and an 80 MHz pulse repetition rate capable of producing up to 2W of average power at 920 nm.  The Alcor laser is also available for 1040 nm, for two-photon microscopy applications requiring an even longer excitation wavelength.

If you are interested in learning more about this application, we highly recommend you check out our white paper on the subject titled “How Mode-Locked Lasers Affect the Past, Present, and Future of Two-Photon Microscopy.”  In this white paper which was initially released last summer, we take a deeper look into multi-photon microscopy starting with the invention of the first fluorescence microscope by Heimstaedt and Lehmann, over 100 years ago.  We go on to explore the fundamental physics underlying two-photon absorption as well as a more comprehensive review on the impact of excitation wavelength and two-photon absorption cross-section.  To download the full white paper, click on the link below.

For additional for detailed technical specifications on the Alcor laser series, click here or talk to one of our laser experts today by calling 1-636-272-7227.