RPMC Lasers has made this blog post to show the top three aesthetic laser applications our customers have worked on. Our team of laser experts have over 100 years of combined experience working with our customers, and during that time, we have helped countless engineers and designers by combining our understanding of lasers with their knowledge of the applications to find the perfect laser solution.  This close partnership between suppliers and end-users allows us to provide informed consultation about both laser specifications and their applications. 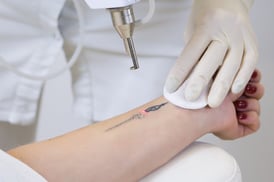 We have all heard anecdotes about someone getting their partners name tattooed on themselves only to end up having the tattoo removed after the relationship has ended.  Nearly one-third of all Americans have at least one tattoo, and of those who do roughly one-quarter of them say they regret getting it.  As a result, nearly 27 million people in the United States alone have at least one unwanted tattoo.   Based on these numbers, it is easy to see why the world-wide tattoo removal market exceeded 11.6 billion dollars in 2016.  The vast majority of these procedures are done using laser-based tattoo removal treatments because they result in the least amount of scar tissue. Laser tattoo removal utilizes a process known as photothermolysis to target the embedded ink in the epidermis and dermis. This is rapid localized heating that results in a large thermal differential, resulting in a shock wave which breaks apart the ink molecules. To read more about this topic that we highlighted in a previous blog post, click here.

Laser hair removal is one of the most popular medical laser applications worldwide and is projected to reach 1.35 billion dollars annually by the year 2022 according to Transparency Market Research. As this market started to explode in the early 2000s, it became popular so quickly that by 2005 Alexandrite (which was the laser of choice at the time) was the second most popular laser crystal grown worldwide, even though there were no other mainstream applications for the laser technology at the time. Over the past fifteen years diode technology especially high power diode stacks have advanced to the point where they are now far less expensive, far more efficient, and have longer lifetimes than flashlamp-pumped Alexandrite and Nd:YAG lasers. This has enabled a dramatic decrease in both size and the total cost for ownership of a hair removal laser system and has impart fueled the growth projected in the current market. To read more about this topic that we highlighted in a previous blog post, click here.

According to the American Association of Dermatology (AAD), acne is the most common skin condition in the United States, affecting up to 50 million Americans annually with a nontrivial percentage suffering from a chronic form of the condition.  Fortunately, for people suffering from persistent acne, Paul M. Friedman, MD et al. showed in 2004 that near-infrared laser light could be used to damage the sebaceous glands causing them to shrink or in some cases be destroyed without damaging the skin.  This particular gland is the one responsible for producing the oil, which is metabolized by the bacteria during the inflammation process.  While this procedure is not painless, the only side effects shown were temporary redness and swelling, which lead to the FDA approving the first commercially available acne treatment laser, the Smoothbeam by Candela a 1450 nm wavelength diode laser.  Since then, many other lasers in the 1400nm – 1500nm range have been approved by the FDA for the treatment of acne.  To read more about this topic that we highlighted in a previous blog post, click here.