The characteristics of lasers for Holography

Holography is a science of creating and then recording the light patterns that result from interaction between two light beams.  The reference beam is directly imprinted on the recording media, while the object beam will interact with the recording material by ether getting transmitted through or being reflected off the subject of the study. Normal photography records a simple image, but a holographic image taken from a hologram will record the phase and amplitude intensities of the two paths when they reach the recording media. (Fig.1) When the resultant image is viewed under normal light it is unreadable, but when illuminated by a suitable light source the path of light is recreated and the original object can be seen clearly. The Fine details, dimensions, and of course the 3D nature of the object is almost exactly reproduced when done correctly.

Holograms are used in various fields such as security for packages or credit cards, Medical to receive a more accurate view, and detail-oriented mapping. Due to the highly accurate nature of the holographic image, they have also been used to record and show precious items that cannot normally be on display to the public, such as the collections from the Faberge museum in St Petersburg by the Hellenic Institute for holography.

Holography is more than a technique for secure or unusual image recording, many other applications exist, such as surface metrology, microscopy and data storage. Holography is the key to future developments such as virtual or augmented reality. 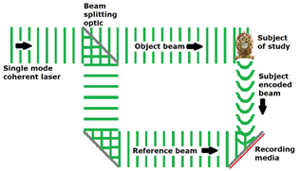 As seen from fig 1. The primary light source for holographic applications is a laser for a number of characteristics:

There are different methods for creating the holographic recording, but the laser is often the principle source of coherent light. Since the “image” creation is based on the phase difference between the two light paths caused by the object of the study, any phase difference (non-coherence) caused by the laser through operation, will either destroy the resolution or severely reduce the available depth of field of the final image. The coherence length (narrow linewidth) of the laser is a key characteristic that needs to be considered in the setup. This is not as critical during the reproduction of holographic plates, so the coherence can be much shorter. See our new Lasers 101 page for in depth information on Solid State Lasers.

Like standard photography, the creation of an image needs exposure time. This exposure time is dependent on the sensitivity of the recording media and the amount of light that is available. As the source of light for holography is the laser, higher power outputs offer shorter exposure times and/or larger fields of view. Thought should be given to the effect of optical power on the object. (Fig 2)

For static objects in a vibration isolated environment, exposure time becomes less critical, and lower powered lasers can be considered, however in these cases wavelength stability and drift still be considered. Slight drift or hopping of the wavelength can cause distortions or loss of clarity of the final image.

The final consideration when looking at lasers for holography is the actual wavelength needed for the best results. Security patches and labels would be useless if they were recorded in the IR region outside the range of the human eye. The eye has different sensitivity to different wavelengths through the visible region. Many modern holographic images make use of multiple wavelengths, red green and blue to produce the colored final image.

Other holographic applications that do not rely on the eye as their “reading” apparatus can operate outside the visible region. Data storage for instance has no need for visibility and would benefit from shorter wavelengths that offer higher density storage.

UniKLasers design and manufacture a range of single frequency lasers ideal for the highest demands of holography applications.

Using patented BRaMMS technology, that replaces an end cavity mirror with a volume Bragg grating (VBG) and Michelson interferometer, the combination of which offers ultra-narrow line-widths below 500 kHz, meaning coherence lengths in excess of 100metres, that are stable to picometre levels over 4 hours of operation. Additionally, the high efficiency of the single frequency allows the generation of high power outputs in a wide range of wavelengths covering the UV-Vis-NIR. 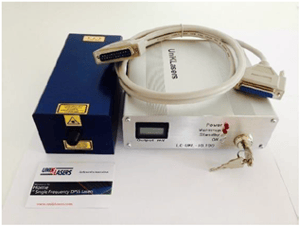 Therefore, we believe we are the best option for ALL your DPSS Laser and Laser Diode needs!