One of the most challenging tasks in any aerial combat situation is to determine which assets on the ground should be targeted and which ones should be avoided.  This is particularly challenging in the situation where enemy assets are camouflaged or hidden amongst civilian assets.  Because of this a practice commonly referred to as “painting the target” has been successfully deployed for many years to allow for ground forces to identify and designate targets for aircraft to attack.  Of course, on the modern battlefield soldiers aren’t actually carrying around cans of spray paint for pilots to see from the air, instead, they are using portable laser designator systems which are designed so to light up the target in the infrared.  In this application note, we will examine the basic laser requirements, for laser designation systems and take a look at what types of lasers are ideal for these systems.

As shown in the figure below (courtesy of Areté Associates) there are many different types of laser designation systems used by the military today, but they all have the same basic functionality.  In a laser designation system, an infrared laser is fixed onto a target of interest and pulsed with a known frequency code.  This allows an infrared receiver on the plane or missile to lock onto the pulsing light scattered off of the target and eventually destroy it.  On the surface the requirements for the laser seem fairly straightforward, the laser needs to be invisible to the human eye and it needs to have a programmable pulse rate, but when you look in more detail there are a lot of small factors that add up to big problems it not addressed properly.

According to the NATO standard STANAG 3733, the laser beam must be tight enough that the 90% of its energy is on target for 95% of the time assuming a 2.3 by 2.3 m size target.  Since the idea is for the soldiers to be a safe distance (up to of 5 kilometers) from the target when they designated the target, the laser beam divergence and pointing stability are two of the most critical factors in laser designation.  For example, if a laser has a half angle beam divergence of 1 mrad than its radius will expand at a rate of 1 mm per meter.  This may not seem like much but, that means that at half of a kilometer from the target, an initial laser spot of 1 mm will already have expanded to 1 meter wide at the target.  The figure below gives a visual representation of just how rapidly a laser with a half angle divergence of 1 mrad can balloon in size.  This not only makes it difficult to lock onto smaller targets without more than 10% of the light spilling over, but it also greatly reduces overall intensity of the reflected light making it harder to be detected by the missile’s targeting system.  The same thing holds true for the pointing stability of the laser since very small angular variations in pointing can result in a huge positional variation of the spot size at a distance.  Therefore, the making it difficult to meet the 95% stability requirement also laid out in the NATO standards.

Another property that must be considered is the accuracy of the pulse repetition rate.  In order for the receiver on the munitions side to confirm the target, it must be able to confirm that the light is pulsing with the appropriate frequency code.  As a result, if there is jitter in the pulse triggering then the system won’t be able to lock on regardless of the signal’s brightness.  Lastly, in addition to the optical considerations laid out in the last paragraph, just as important are the ruggedization, miniaturization, and power consumption requirements for the laser.

Areté Associates based out of Northridge, California set out to make the ideal source for laser designators, which took into account the wide range of performance requirements laid out above, developing the AIRTRAC laser source.  This 1064 nm DPSS laser source provides low divergence (< 250 mrad), high pulse energy (>70 mJ), and programmable pulse repletion rate (up to 30Hz) with less than 1ns pulse jitter.  All of these features combined make the AIRTRAC fully comply with NATO STANAG 3733, therefore ideal for military deployment in laser designator systems.  In addition to excelling at the optical requirements for laser designators the AIRTRAC also meets all MILSPEC requirements with a TRL6 rating, weighing < 0.5 pounds, with a volume < 7 cubic inches, and a wall plug power consumption < 30 W. 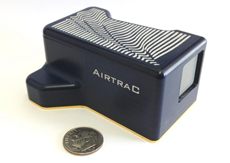 Here at RPMC lasers, we have teamed up with Areté Associates to introduce the AIRTRAC into the laser designation market.  In addition to the 1064 nm variant described above, we at RPMC also offer the AIRTRAC laser series in both the second and third harmonics, 532 nm and 355 nm respectively.   For additional information including detailed technical specifications on these lasers click here or talk to one of our laser experts today by calling 1-636-272-7227.