A helium–neon (HeNe) laser, is a type of continuously operating, or continuous wave (CW) gas laser in which the gain medium is a 10:1 mixture of helium and neon, pressurized within a glass tube. When a DC current is applied to two electrodes on opposite ends of the tube, helium atoms are excited into metastable states. When excited, helium atoms can efficiently transfer energy to neon atoms with quite similar excitation energies. Due to the multiple energy levels of neon atoms, multiple laser transitions are possible with this type of gas laser. The most common transition used today is 632.8nm (red). However, 543.5nm (green), 594nm (yellow), 612nm (orange), and 3.39µm (MWIR region) are also possible by utilizing resonator mirrors with coatings with peak reflectance at the aforementioned wavelengths. The HeNe lasers used today, are relatively compact, compared to their predecessors, with a tube length ranging from 15-50cm on average, output powers of a few milliwatts, and excellent beam quality. One of the most powerful, early versions of the HeNe lasers required a staggering 15m long tube to generate a mere 150mW. 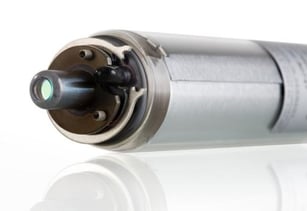 Working tirelessly in the evenings and on weekends, a new team, comprised of Alan White and Dane Rigden of Bell Labs, worked to improve stability and reduce noise of Javan's version. They decided to replace the radio-frequency discharge used by Javan and Bennett with a hot-filament direct-current discharge. They observed increased output power and revealed previously unobserved details in the laser spectrum, including a new metastable helium state. Hypothesizing that this newly observed state may allow emission at the 632.8nm neon line, the team sourced mirrors with a coating that had the peak reflectivity in the red region. "We put the first gas in the tube, lined up the concave mirrors, and bingo, it went. We were three excited people," said White, including a witness they had invited to corroborate their findings, should they be successful. And oh were they successful. The contributions of these two teams forever changed the course of physics, lasers, and every application utilizing the benefits provided by this breakthrough. Since their development, HeNe lasers have been widely used in telecommunications, internet data transmission, medical devices, laboratory experiments, holography, construction alignment, classroom demonstrations, and many more areas.

This brings us back to the present day utilization, and the future of HeNe lasers. There have been many discussions around whether or not diodes will replace HeNe lasers. However, while this may be plausible for certain applications, the superior beam quality and competitive cost of HeNe lasers ensures a solid foothold in applications where excellent beam quality is critical. One of our trusted partners, LASOS, designs, develops and manufactures high quality HeNe and Ar-Ion laser systems, and they have been in the game since shortly after the inception of the laser industry. They knew, back then, the importance of HeNe lasers, and they see a bright future ahead. The roots of LASOS go back to the first commercial laser production started at Siemens in Munich in 1966 with the manufacturing of He-Ne lasers. Since then, LASOS has been perfecting the process of manufacturing long life, low noise, and high stability HeNe laser tubes and modules with excellent beam quality.

The HeNe lasers from LASOS boast an excellent TEM00 beam, robust mechanical design, a long service life of up to 30,000 hours, and are available in 543nm, 594nm, and 632.8nm wavelengths, with output powers from 0.5mW to 20mW. Choose between standard and customized models, with available options such as single-mode or multimode, random or linear polarization, Brewster window tubes, and fiber coupling. All models can be provided with either a laboratory power supply, or one of three OEM power supply versions. Designed for long life, low noise, and high-stability, with many customization options, these HeNe lasers are perfect for applications including spectroscopy, interferometry, holography, medical, and more!