Once thought to be impossible, blue, green and UV laser diodes have now become commonplace.  These lasers are being used in a wide range of applications from blue-ray players to commercial lighting & displays to copper welding.  In this post, we are going to take a look at the underlying material properties of semiconductors, GaN in particular, and how it has led to the development of blue, green and UV lasers diode.

Before we can get into the specifics of GaN diodes, it's important to remember that the output wavelength of a semiconductor laser is based on the difference in energy between the valance and conduction bands of the material.  This energy difference is known as the bandgap energy, as shown in the figure below, determines the photon energy.  Since the energy of a photon is inversely proportional to, its wavelength this means, that a larger bandgap energy will result in a shorter emission wavelength. 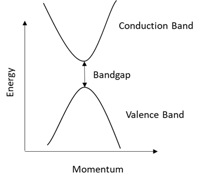 Semiconductor devices can be engineered to have a specific bandgap energy by combining various elements to form binary, ternary, and quaternary alloys.  These semiconductors can have their bandgap further tailoring varying the stoichiometry in ternary and quaternary semiconductors.  In our specific case of visible laser diodes can be produced from a combination of AlN, GaN, and InN.  The resultant alloy typically referred to as GaN in shorthand, can be theoretically be combined using the following formulas AlxGa1−xN and AlxInyGa1−x-yN to form any bandgap which falls within the “banana” shown in the figure below. 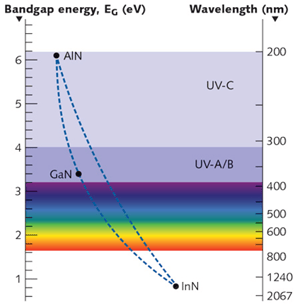 In practice, the material science involved in stably producing laser diodes with any arbitrary stoichiometry is far more challenging.  As stated earlier for many years it was thought that these challenges would never be overcome, until 1996 when the first AlGaN laser diode was invented by Shuji Nakamura.  Nakamura's work with GaN based semiconductor lasers and LEDs was so revolutionary that he was later awarded the Nobel prize in physics.  Over the past 20 years, the technology for making GaN laser diodes has matured, into its own branch of optoelectronics.  These laser diodes are now available in wavelengths from 375 nm to 521 nm, with output powers exceeding 100 watts.

Here at RPMC we are proud to represent several of the leading manufactures of GaN based lasers diodes.  Ushio based in Japan and TopGaN based in Poland, allow us to provide you with a wide assortment of multi and single mode TO packaged laser diodes between 404 nm and 460 nm.

Additionally, we are able to provide fiber coupled laser diodes, from Wavespectrum in China, at wavelengths from 405 nm to 520 nm with output powers up to 1.2 watts. 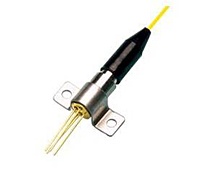 For detailed technical specifications on our blue, green and UV laser diodes click here or talk to one of our laser experts today by calling 1-636-272-7227.

Additionally, if you want to learn more about laser fundamentals check out out Lasers 101 laser selection guide.