Flashlamp pumped pulsed Er:YAG lasers have been widely utilized in dermatology and dentistry as an alternative to CO2 lasers, but historically continuous wave (CW) and quasi-continuous wave (QCW) Er:YAG lasers were problematic due to their unique energy level decay times.   Our friends over at Sheaumann Laser have worked hard over the years to figure out a methodology for overcoming these issues and have since developed a diode-pumped 2.94 micron Er:YAG lasers known as the MirPac series, with a maximum output power of 1.5 watts.  In this blog post we are going to break with our traditional format, and review two of the white papers Sheaumann has published on their diode-pumped Er:YAG lasers.  A link will be provided at the end of this blog post for you to download the full articles.

Both of these articles do an excellent job of explaining how the advent of high brightness 976nm laser diodes facilitated the commercialization of diode-pumped Er:YAG lasers.  The articles go on to tell that the reason why these sources are so important is the unique energy level structure (shown below), where upconverting is necessary to prevent self-termination of the lasing process due to the inverted decay lifetimes of the upper and lower energy levels.  In most traditional lasers the upper level should be metastable, meaning that it has a relatively long decay time allowing for population inversion; but in the case of Er:YAG not only are the upper and lower levels both metastable the lower level has a decay lifetime of 64 times longer than the upper level.  Traditionally this would not allow for stable lasing, but the articles go on to explain how the unique upconversion process between the Er3+ ions depletes the lower level allowing for population inversion to be maintained. 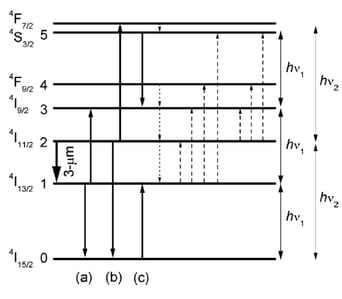 Even with this unique ability to create population inversion with inverted decay times Er:YAG still, has an issue with the initial population inversion being much larger than the steady state level.  This leads to a massive spike when turned on causing excess gain which generated a short pulse, which is quickly dampened down to a steady state level.  In these articles, they explain that by using a “warm start” technique where the pump diode is always on this initial spike can be eliminated.  This is done by maintaining the pump diode at approximately 80% of the Er:YAG gain threshold, keeping it just below the threshold, but at a relatively steady state population inversion density.

For a more detailed explanation of the phenomena, you can download the full articles from Sheaumann Lasers by clicking on the links below.

Here at RPMC Lasers, we are proud to provide the MirPac Er:YAG diode pumped solid state laser from Sheaumann.  This 2.94-micron laser module can produce up to 1.5 W of output power in quasi-CW mode.  It is available in a free space configuration hermetically sealed with an internal dual thermoelectric cooler for outstanding power stability and low RMS noise.  The MirPac laser, when operated in the QCW, can generate pulse energies as high as 10 mJ with a 5 ms pulse width and 100 Hz repetition rate, or it can be utilized to produce 1 mJ pulses at repetition rates from a single-shot to 1kHz.