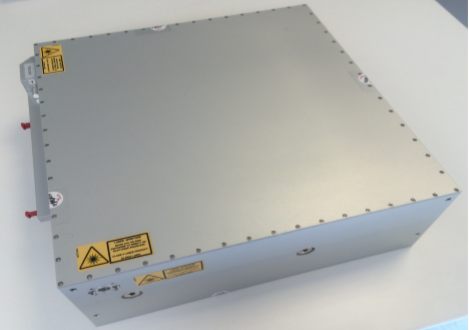 LIDAR Becoming the Future of Bathymetry

Bathymetry is the study of the underwater depth in oceans, lakes, or seas and is used to generate detailed topographical maps of bodies of water around the world.  While there are several different methods of underwater mapping including sonar, in recent years LIDAR-based bathymetry techniques has become more and more popular.   One of the primary advantages of LIDAR is that it can be performed by a laser mounted on aircraft or drones, enabling aerial surveillance of shallow waters and coastal regions where larger watercraft are not able to enter.  Additionally, the non-contact nature of this method is ideal for use in delicate and sensitive environments, where the ecosystem can be adversely affected by submarine sonar equipment.  In this blog post, we are going to discuss the basics of LIDAR-based aerial bathymetry, and briefly review the pros and cons of the technique.  We will then go on to discuss the typical laser requirements for such devices focusing primarily on the laser sources used for high altitude and deep water applications.

As in most LIDAR systems designed for distance measurement, bathymetric LIDAR relies on time-of-flight determination for calculating the distance to the target.  This is done by using a time-gated detector which is synchronized with a pulsed laser source so that the round-trip time (Δt) can be determined.  In traditional LIDAR, the range (R) to the target is then determined using the following equation, R = C × Δt/2,  where C is the speed of light.  In bathymetry though there is an added complication because you want to determine the depth of the water, not the distance from the transceiver to the water.  Therefore, you need to measure both the distance to the surface of the water and the floor and take the difference between the two.  This is typically done using a “multi-beam” approach, which takes advantage of the difference in absorption of the water at various wavelengths.   As can be seen in the graph below, water has an absorption minima around 500 nm, meaning that green laser light will penetrate much deeper into the water than near-infrared light will. 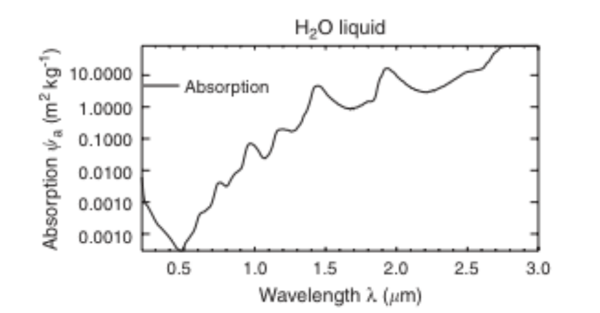 Because of the absorption spectrum of liquid water, 1064 nm and 532 nm lasers are typically used as the two transmission wavelengths for this application.  In this process, the 1064nm laser is first used to establish the reference level for the surface of the body of water, using standard TOF processing.  Once this reference level is determined, the system will then look at the TOF for the green laser minus the TOF for the 1064 nm laser pulse, to calculate the total depth.  It is important to note that the speed of light is much slower in water than in air, so it is necessary to take the index of refraction of water into consideration resulting in the following equation for depth, D = ( ΔT532 − ΔT1064) × C/2n.  In this equation ΔT532 and ΔT1064 represents the total TOF for the green and NIR laser pulses respectively and n is the index of refraction of water, which typically varies between 1.33 and 1.38 depending on the salt content.

While liquid water does have significantly lower absorption at these shorter wavelengths, that is not the only factor that will determine the lasers ability to penetrate deep below the surface of the water; scattering is also a significant factor.  Even if you measure crystal clear water, there will always be a certain amount of scattering associated with the Rayleigh effect.  As a result, it is essential to use a laser with significant pulse energy, for enough photons to survive the round-trip flight back out of the body of water without scattering or being absorbed.  Additionally, the laser must have as short a pulse width as possible since the depth resolution is directly proportional to the pulse width of the laser.  A detailed explanation of this relationship is beyond the scope of this blog post, but it should be reasonably straightforward to understand that the lidar system cannot resolve TOF less than the width of the laser pulse itself.

With all of these factors taken into consideration, it isn’t a surprise that very few lasers possess the pulse width, pulse energy, form factor, and active q-switching required for bathymetric lidar.  One such laser system which does is the Vento from Bright Solutions.  This laser, which is only 55 cm x 40 cm x 20 cm, is perfect for deployment in smaller manned aircraft such as a single-engine propeller plane, while still meeting or exceeding all of the optical requirements.  The Vento is a 532nm diode-pumped solid-state (DPSS) laser with a built-in amplifier allowing it to produce over 1.5 mJ of pulse energy with a pulse width as low as 350 ps.  This laser system is capable of producing up to 50W of average power, at a variable pulse repetition rate.  The Vento is one example of Bright Solutions high energy configuration, currently deployed in a wide range of commercial bathymetry systems.   The Vento is also available at 1064 nm, making it the ideal laser series for both wavelengths used in a multi-beam transceiver.  Here at RPMC, we are proud to be the exclusive North American Distributor for not only the Vento series of high power pulsed DPSS lasers but for all products from the Bright Solutions Group.

For detailed technical specifications on the Vento lasers from Bright Solutions, click here or talk to one of our laser experts today by calling 1-636-272-7227.